In Cassel where, from the autumn of 1883, he held his first important post as a conductor, Mahler fell in love with a theatre singer, the soprano Johanna Richter. Like all those he had already succumbed to, it was stormy affair, and one which was overshadowed by the fear of scandal which, in a provincial theatre, would have no doubt been detrimental to both.

All that we know about this love affair is what Mahler revealed in letters, in veiled terms, to his friend Fritz Löhr. On 1st January 1885, he told Fritz Löhr that that he had written the soprano singer “six Lieder”. Today, we can say, with some certainty, that these were only poems. Manuscripts for the first two have survived and are marked: December 1884. The accompanying music came at a slightly later date, but it is impossible to accurately say when. The finalised cycle only included four songs. The original manuscript is currently unknown, but there is one in the Rosé collection which appears to date from the 1880s upon which is written the title: “Songs of a Wayfer (fahrenden Gesellen), in four songs for a deep voice with orchestral accompaniment”. Another title page, which seems more recent, is labelled “Rhapsody in four poems”. Although it also mentions orchestral accompaniment, its actual score was certainly completed at a later date, probably around 1891-1892, and revised again in 1896, shortly before the first performance.

The piano version we are accustomed to hearing is the one Mahler himself published with Weinberger in 1897. The most surprising thing is that it differs in many details from the orchestral version, which was published the same year and by the same publisher. From the start, the rhythmic notation for the first four bars is not the same in the two scores. Later, there are one or two important differences, even in the vocal sections. It is therefore the original version from 1884-1885 that we are accustomed to hearing, and which, as such, deserves recognition.

The word Gesell means “companion” in old German (Saal: room, house; the word Gefährte means “travel companion”). Later on, the word Gesellen referred to workers, apprentices or agricultural labourers who travelled around Germany looking for work. However, the meaning of the French word “Companion” can be confusing, the usual translation “Songs of a Wayfarer” seems to better fit the context, even if it is less exact than that of “Songs of a wandering companion”.

Although Mahler did not put his name to the various editions of the Lieder eines fahrenden Gesellen, he is obviously the author of at least three of the poems. A few years after his death, the origin of the first text, Wenn mein Schatz Hochzeit macht, was found in the Knaben Wunderhorn. This discovery was somewhat puzzling, since the composer claimed that he had not seen the Arnim and Brentano collection until much later, whilst rummaging through the library of his Weber friends in Leipzig in 1888. Perhaps Mahler had instead, consciously, or unconsciously, recalled a popular song from his childhood, or had he read it in a newspaper or in an anthology other than the Wunderhorn? In any case, the use of the two poem anthologies alone, which were combined in the first song, proves that the composer had already undertaken an in-depth study of this style of popular German poetry.

As with the Poisl Lieder poems from 1880, the Gesellen Lieder poems showcase one of the most popular literary themes of German romanticism: that of the disappointed hero, an innocent victim of fate, wandering aimlessly near and far, seeking to alleviate his pain. As demonstrated in his fahrender Gesell, had Mahler himself not frequently felt like an outsider in a cruel world, a world full of deceit and deceptive appearances? The contrast between the beauty of nature and the despair of the human heart is another popular theme amongst romantic poets. From a musical stance, the cycle includes some Mahlerian Leitmotive, such as the grupetto which appears in the first, the ascending and descending fourth, as well as the ascending melodic sixth measures. The predominance of walking rhythms would soon become commonplace in all of Mahler’s work. It also characterizes the Wanderlied genre, for which the first part of Schubert’s Winter Journey remains the supreme model.

Ging ’heut’ morgen über’s Feld was created shortly after its composition and performed during a charity concert given by Mahler on 18th April 1886, in the winter garden of the Prague Grand Hôtel. Betti Frank, a singer at the Prague theatre, accompanied by Mahler himself on piano, were highly applauded and the Prager Tablatt critics were particularly complimentary.

But it was not until 16th March 1896, in Berlin, that the orchestral version of the complete cycle was created, which had been revised by Mahler. They were performed by the Dutch baritone, Anton Sistermans, and accompanied by the Berlin Philharmonic Orchestra (which was conducted by Mahler). During this same concert, the revised First Symphony was performed for the first time, and Mahler also conducted the first movement of the Second Symphony, also entitled Todtenfeier.

Mahler again provided piano accompaniment to the Lieder eines fahrenden Gesellen in 1907 in Berlin, and conducted them one last time in 1910, in New York. They are now some of the most frequently interpreted songs in the Mahlerian repertoire, as evidenced by the large number of versions appearing in our discography.

In this Lied, experts in Bohemian-Moravian folklore have found a characteristic example of how the folklore of Mahler’s native country influenced his work. The main motif, a baroque ornament known as a grupetto, is also a bohemian melisma omnipresent in the works of Dvorak and Janacek. In the Lied in question, it is repeated no less than 23 times. To explain the alternation of fast and slow tempo, the following psychological reason has been suggested: the Gesell is running away to forget his unfaithful beloved. However, from time to time, he is overcome with sad thoughts that suddenly stop him in his tracks. The last stanza, where most of the early rapid interpolations have disappeared, is where he reaches the height of his sorrow.

This Lied would provide the initial movement of the First Symphony with its melodic substance. The “happy” nostalgic grupetto reminder from the previous song deserves particular attention (on “Guten Tag”).

Mahler’s codas remain extremely inventive and poetic miracles, but this one surpasses many others and provides us with proof of the twenty-four-year-old musician’s compositional mastery. As if in a state of distress, the fahrender Gesell did not even have the strength to finish his song, the vocal line stopping before reaching the tonic.

There is no separation between the stanzas here, just two distinct episodes linked by a long piano interlude. For once, the accompanying text is a must. The brief sentences, punctuated by pauses, express the hero’s boundless despair, a despair which, towards the end, culminates in a melodic leap of ascending sixths, followed by a long descent into the lower register and a mysterious instrumental coda in quick triplets. The only moment of relaxation comes at the end of the interlude, in the “Wenn ich in dem Himmel seh” episode, where the descending minor second “Weh!” keeps coming back like a chorus. The exacerbated chromaticism of the melody, which is rarely found in Mahler’s work, perfectly suits the Lied’s desperate character.

From a dramatic point of view, the presence of a few bars at 5/4 can again be justified here: the sorry traveller interrupts his walk for a moment, and at the same time a peasant arrives, singing while he works, holding out a longer note and thus changing the rhythm of his song. Here again, artistic, and popular elements combine and blend together in a way that is as artistic as it is harmonious. As in the previous Lied, the melodies keep coming back on themselves, almost as if the weariness and despair of the traveller robbed him of the courage to continue. The extreme understated accompaniment is a source of poetry and expression. The two unexpected modulations are typical of Mahler and have a magical effect. Despite the final quotation of the first theme in minor, and the last vocal phrase at the lower end of the register, this last Lied – like the whole cycle – ends with an atmosphere of serene and luminous resignation, as do the Kindertotenleider and Das Lied von der Erde. Furthermore, there is an obvious atmospheric kinship between this last work, written in 1908, and that of the Gesellen Lieder of 1885. Although no allusion is made to eternal rest, it seems that in either case, death is involved. All of Mahler’s work is filled by the thought of the hereafter. A better world which will serve as a refuge for the afflicted and console their earthly misfortunes. 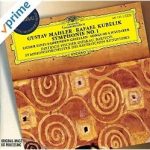 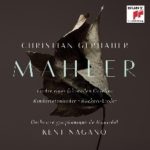 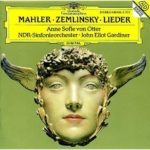