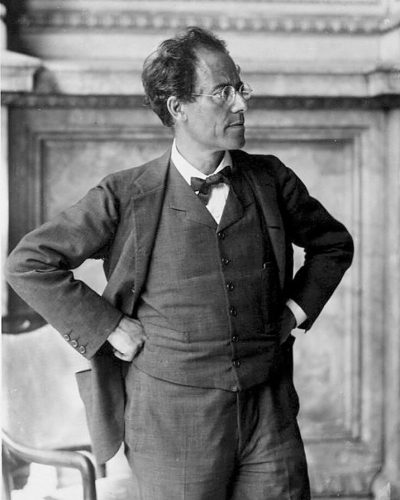 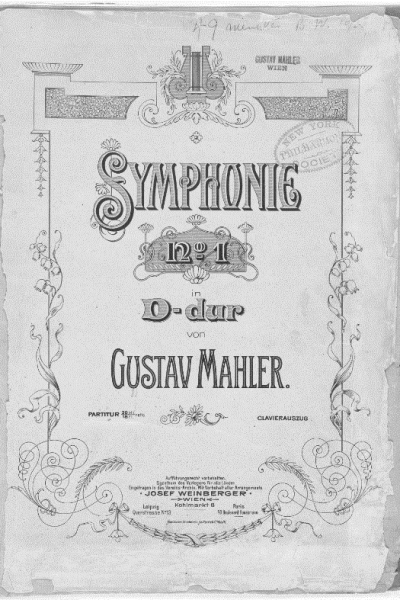 Born on 7th July 1860 in Kaliste, Bohemia (not far from the border with Moravia); died in Vienna on 18th May 1911.
Born into a German-speaking Jewish family, Gustav Mahler studied at the Vienna Conservatory, together with Hugo Wolf, and began a double career as a composer and conductor in 1880.

He very quickly became a renowned figure in both these chosen careers. The Das klagende Lied (Song of Lamentation) cantata dates back to 1880. The first stages of the conductor’s career were in Bad Hall (1880), Ljubljana (1881-1882), Olmütz (1883), Cassel (1883-1885), Prague (1885-1886) and Leipzig (1886-1888). Lieder eines fahrenden Gesellen (Songs of a Wayfarer) were written in Cassel. The First Symphony, entitled “Titan”, was drawn up in Cassel, completed in Leipzig and premièred in Budapest in 1889. Mahler had been appointed director of the city’s Opera House in the autumn of 1888. He stayed in this post until March 1891, after which he became the Chief Conductor at the Hamburg Opera House.

During the years that followed, most of the Wunderhorn Lieders were composed, as well as the Second “Resurrection” Symphony (1894) and the Third Symphony (1896). In Hamburg, Mahler had an excellent supportive team under his wing and, from 1894, a young man named Bruno Walter became his assistant. In 1897, with his promotion to the post of Director of the Vienna Court Opera, Mahler entered the most prestigious stage of his official career. Sparing neither others or himself, he found himself with both devoted supporters and fierce adversaries. His marriage to Alma Schindler in 1902 marked a turning point in his life: from 1904 to 1907, together with the painter-decorator Alfred Roller, he came up with some of his greatest productions which played a large part in establishing the Court Opera’s renowned status. Following this, the Fourth (1900), Fifth (1902), Sixth (1904), Seventh (1905) and Eighth (1906) Symphonies were composed, as well as two cycles of five lieder, based on poems written by Friederich Rückert (1901-1904): the Rückert-Lieder and the Kindertotenlieder.

In 1907 Mahler suffered three “massive blows” in his life: the loss of his job in Vienna, following openly anti-Semitic attacks; the death of his four-year-old daughter; and the discovery that he was suffering from incurable heart disease. Called upon by the director of the Metropolitan Opera, he spent four consecutive autumns and winters in New York (where he also conducted the Philharmonic Orchestra), and each spring and summer season in Europe where, in 1908, he finished Das Lied von der Erde and, in 1909, the Ninth Symphony.

A serious marital crisis in 1910, requiring a consultation with Freud, was one of the reasons why the Tenth Symphony was not completed. Suffering from strep throat in March 1911, Mahler was rushed back to Europe. He died in Vienna soon after.