From a distance, Mahler’s discovery, at the end of 1887 / beginning of 1888, of the “popular Lieder” anthology entitled Des Knaben Wunderhorn (in the library of his Weber friends in Leipzig) seems an almost miraculous event given that, at that time, it fulfilled all the young composer’s aspirations.

Mahler wrote 24 Wunderhorn Lieder in all (including those in the Second, Third, and Fourth Symphonies). They inspired all his Lied between 1888 and 1901, apart from the Nietzschean song in the Third Symphony.

It was in Leipzig that Mahler composed the first group of nine Lieders with piano accompaniment (see Lieder aus der Jugendzeit). Four years later, in 1892, in Hamburg, he immersed himself in the anthology and composed 5 great Wunderhorn Lieder in just one month. In attempt to define their “extraordinary” nature, he entitled them: Humoresken : “I now have the Wunderhorn in my hands. With that self-knowledge, which is natural to creators, I can add that once again the result will be worthwhile!” The accompaniments are immediately designed for orchestra, although written in a pianistic format. On January 28, the final version of Der Schildwache Nachtlied, drafted, according to Natalie Bauer Lechner, in Leipzig in 1888, was finished. On 1st February, Verlorene Mühe was immediately followed on the 6th by Wer hat dies Liedchen erdacht, by das Himmlische Leben on the 10th, and finally Trost im Unglück on 22nd April. Many years later, Mahler told Natalie that das Himmlische Leben had sprung “from his Budapest stagnation” period. He later pointed out how bountiful this little Lied had turned out to be, having been the inspiration behind “the five movements of the Third and Fourth Symphonies.”

The following year, Mahler spent his holidays at Steinbach am Attersee where he composed the Adagio for the Second Symphony, and then the Antonius von Padua Fischpredigt Lied. At the same time, he composed the Scherzo for his Symphony, in which the musical substance is vastly similar. After the first orchestral scores of the Andante and Scherzo of the Second Symphony were completed, Mahler resumed working on the Knabenwunderhorn and completed the orchestration for the Fischpredigt on 1st August 1893. While working, he would picture the eels, carp and pikes with pointed noses sticking their stiff and immovable heads out of the water, gazing up at the Saint and listening to him preach and then swimming away once the sermon was over. In this imaginary scene he saw a delicious satire of human stupidity and sometimes burst out laughing.

This same summer of 1893 also saw the birth of Rheinlegendchen and Das irdische Leben. Mahler explained to Natalie that his inspiration sometimes dictated music to him that would not necessarily fit into the piece of work he was composing at the time. So, for the Rheinlegendchen he decided to use a melodic idea which he had been obsessed with three years earlier and had subsequently forgotten.

Still in Steinbach, three years later, engrossed in his composition of the Third Symphony, Mahler again turned to the Knaben Wunderhorn and composed Lob des hohen Verstandes, in which he used humour to take revenge on the array of critics who treated him with such disdain. It’s “a very funny Lied… it’s competition between an old cuckoo and a nightingale, in which the donkey is to be the referee. Of course, he awards the prize to the cuckoo with an air of great importance. You’ll laugh when you hear it” he wrote to Anna von Mildenburg.

In July 1898, Mahler was on holiday in Vahrn where he was recovering from an operation. All the same, he managed to complete “three new Lieder” for the Wunderhorn which would finalise the the collection “just to give myself proof that I still can”. These were the Lied des Verfolgten im Turm and Wo die schönen Trompeten blasen. As for the third, it could only be the draft of Revelge Lied completed in 1899 in Aussee, in the Salzkammergut, which Mahler considered the most beautiful and successful of the whole collection, and perhaps even “the most important of all his Lieder ”.

Mahler turned his attention to the Knabenwunderhorn, for the last time, in the summer of 1901 where he worked in Maïernigg on the Rückert Lieder and the Fifth Symphony. The inspiration for Tambourg’sell came to Mahler one day when leaving his desk. Immediately he noted down the first notes for the theme in his dark anteroom, and then went to sit near the spring where he quickly completed the draft. It was only then that he realised, with some surprise, that it was not a symphonic motif but a Lied theme and remembered the Tambourg’sell poem. He recalled the first words and they were just what he was looking for: it was almost as if the music had been created especially for it. Once he had returned to the Häuschen, he was able to compare the complete text with the music. He realised that not one word was missing and that the chord was perfect from start to finish.

Since the tiresome adventure of the First Symphony in Budapest, Mahler seemed to have resigned himself to only “composing for his only library of works”. In the autumn of 1893, undoubtedly hoping to find a more informed public in Hamburg than in Hungary, he succeeded in persuading the conductor Julius Laube to devote one of the “popular concerts” to him. These were organised at regular intervals at the Konzerthaus Ludwig. The concert took place on 27th October 1893. The second part is devoted to the First Symphony and during the first part, the six recently composed Wunderhorn Lieder were performed: Das himmlische Leben, Verlore Mühe and Wer hat dies Liedchen erdacht were performed by Clementine Schuh-Proska. Der Schildwache Nachtlied, Trost im Unglück andRheinlegendchen (entitled drei Humoresken) were sung by Paul Bluss. During the concert, the Lieders were warmly applauded, as were the performers, and the audience demanded an encore of the Rheinlegendchen. During November of the same year, Mahler was again invited to conduct the three Humoresken in Wiesbaden. This time they were entitled Drei Gesänge aus “Des Knaben Wunderhorn. After 1893 Mahler would never again use the original Humoresken subtitle at the concert. In fact, these Lieders were not performed again with an orchestra until 1900, when Selma Kurz sang three (Verlorene Mühe, Das irdische Leben and Wo die schönen Trompeten blasen) at the Vienna Philharmonic. At this time, they were simply called Gesänge.

We have seen that Mahler discovered Des Knaben Wunderhorn in late 1887 or early 1888. The most surprising thing is that he was not aware of this anthology sooner, especially since the publication of Des Knaben Wunderhorn [the child’s wonderful horn], at the beginning of the nineteenth century, had been a cultural phenomenon of the highest order.

The two authors of the anthology came from vastly different backgrounds. Achim von Arnim (1781-1831) was born in Berlin to a Prussian aristocratic family. He settled in Heidelberg where, in 1811, he married Bettina Brentano, the younger sister of Clemens Brentano (1778-1842), from the Rhine, the son of a Frankfurt merchant and of Italian descent. A specialist in medieval literature, he was an extremely gifted writer, but an amateur; somewhat unstable, dissatisfied, and restless. Besides, both Arnim and Brentano were “vagrants” in the romantic sense of the term: they travelled endlessly from city to city, gathering the materials necessary for their erudite task.

To gather all the materials necessary for his anthology project, Brentano travelled to Swabia, North Germany and the Rhineland with his sister Bettina. Not only did they note down several different versions of the poems for oral transmission, but they tirelessly devoured old prayer books, chronicles, and almanacs, gathering an enormous mass of documents in the process. The first volume, dedicated to Goethe, was published in 1805, and the second in 1808. Both were a huge success, hailed as acts of patriotism, at a time when German self-esteem had been deeply wounded. The title Des Knaben Wunderhorn (“The Boy’s Magic Horn”) is none other than the first poem, a short ballad of French origin.

The Wunderhorn Lieder with orchestra are large-scale symphonic Lieder, with the same inspiration as the Second or Third Symphony and really designed for the orchestra as they lose a lot when accompanied by the piano. Strictly speaking, they do not constitute a cycle, but rather a collection in which their sequence corresponds more or less to their order of composition. Anyway, they have so many common elements between them – the style of the poems, the literary “themes”, the atmosphere, not to mention the musical language – that they are very often sung together but rarely in the same order. Their often-epic style places them in the same tradition as the great ballads of Schubert and Löwe. Even better than in the earlier smaller Lieder, which are significantly less elaborate, Mahler demonstrated just how much he identified with the naive and colourful universe of the Wunderhorn. There he discovers a surprisingly strong image of man and his earthly destiny, an image that is both humorous and tragic, and even a philosophical, mystical vision of the human condition, deeper, more universal than seen with most romantic poets.

In both concerts and records, we have recently turned to changing these Lieder duets, so they are appropriate for both a male and female voice. Of course, the execution improves the life and diversity. It is no less true that these songs were not designed to be duets, even if half of the poems involve two characters. The “cues” are usually so short that the changes in timbre eventually destroy the musical unity. It seems that maybe we should, above all, take into account the opinion of the composer himself, who, around 1904, wrote in one of his letters: “All of my Lieder have been designed for male voices”. It is nevertheless true that he himself entrusted the first to two singers, a man, and a woman, but never the same Lied to two voices. While it is therefore perfectly legitimate to entrust some of the Wunderhorn Lieder to female voices, in particular Wer hat died Liedlein erdacht and Rheinlegendchen, it doesn’t seem less certain that Mahler would have strongly objected to the popular custom of transforming the duet Lieder dialogues. 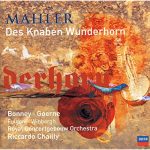 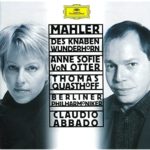 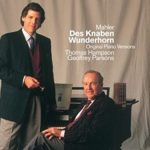