The Rückert Lieder are the contemporaries of the Fifth Symphony. We can therefore refer to them directly to understand their composition. Let us not forget, however, that in the summer of 1901, the villa in Maïernigg was completed. At the beginning of June, Mahler took the train to Klagenfurt, where his sister Justi was tidying up the “Mahler Villa” to try and give it a “lived-in feel”. The new house was in a beautiful location between the forest and the lake, and on the first day Mahler went out onto his balcony contemplating the Wörthersee. He exclaimed: “It’s really beautiful! We shouldn’t be able to afford something like this!”

When Mahler returned to Maiernigg at the end of June 1902, he began a new life Indeed, he was accompanied by his young and radiant wife, Alma, who had replaced his sister Justi as mistress of the house. The circumstances surrounding the composition of the last Lied, Liebst du um Schonheit, are detailed in Alma’s diary. The choice of poem is moving in itself considering that Mahler delayed marrying Alma for several months. Her beauty, charm and youthfulness attracted yet frightened him at the same time. One day in July 1902, he set the text to music to make it a declaration of love. He then hid the manuscript in the Siegfried score which Alma regularly worked on. However, much to Gustav’s disappointment, she did not open her piano for several more days. As a result, he ended up having to prompt the discovery by offering her a deciphering lesson. The handwritten sheet fell from the volume; it was at this point that Alma discovered her “first love song”, written for her eyes only, a “private” Lied [“privatissimum”]. They sat at the piano and played it together. The profound expression contained within the last sentence, “Liebe mich immer, dich lieb’ich immer, immerdar” [love me forever, I love you ever, evermore] stirred the young woman’s soul to its very depth. She played the Lied over and over again and that evening in her journal, she wrote: “I almost cried. The man has such depth! And how I lack soul! Sometimes I realise how small I am and how little I have in comparison to his immeasurable wealth!”

The Rückert Lieder were created in Vienna, in January 1905, during a concert. The concert programme consisted mainly of first performances: the five Kindertotenlieder (completed the previous year), the four Rückert Lieder from 1901, the four Wunderhorn Lieder from 1892 to 1898 and the two Lieder borrowed from the same poetic collection and composed in 1899 and 1901. Given the intimate nature of the pieces, Mahler insisted that the evening take place in the small concert hall in Musikverein. The occasion brought together three of the Opera’s best singers, and three men; this fact deserves extra recognition since, up until then, it had been common practice to almost always entrust these Lieder to female voices. They were the tenor, Fritz Schrödter, and the baritones, Anton Moser, and Friedrich Weidemann. The latter would become Mahler’s favourite interpreter for a long time to come, at least for the Kindertotenlieder. The small orchestra was made up of musicians chosen from the Wiener Philharmoniker. At the dress rehearsal on 28th January 1905 at 2:30 PM, the public was admitted as all tickets for the concert had been sold out in advance. The audience’s reaction was very favourable. The next day, the official concert began at 7:30 PM. Long before the actual starting time, the small room was packed, and many people had to be turned away. The attentiveness and respectful attitude of the public proved that the battle had been won. Mahler requested applause between each group of melodies. The tension in the room kept increasing until the end of the performance. Whether partial or impartial, all the contemporary onlookers had to admit that the evening’s performance had been “the only real triumph of the entire Vereinigung concert series”. “Mahler’s Lieder touched everyone,” wrote Paul Stefan. We exulted with him, were sad with him, childlike, cheerful, pensive. One revelled in his skill and mastery of the small form, the beautiful realisation of beautiful poems.

These five songs (exclusively lyrical in character) illustrate a rare moment in Mahler’s life, a time when he was level-headed and relaxed. In addition, they mark the successful realisation and perfection of the Mahlerian Lied.

The entire poem is based on verbal interplay, the ambiguity between two homonyms, Lider: eyelids, and Lieder: songs. In this Humoreske, we find the same stubborn movement of fast eighth notes contained within Das irdische Leben and the Purgatorio movement of the future Tenth Symphony, as well as the same elusive, disturbing, bittersweet character and elliptical brevity. Mahler saw himself in this poem “which he could have written himself”. Indeed, just like the poet, he could not bear the fact that people wanted to know his pieces before they were completely finished and considered “curiosity as betrayal”. He admitted, however, that out of all his songs, this one was “the least important”. This is perhaps the very reason why it would be one that would please the public the most.

Throughout the poem, as in Blicke mir nicht in die Lieder, Rückert took pleasure in bringing together words from similar sounds, such as Linde (soft), Gelinde (extend), Liebe (love), Lieblich (lovely). The ambiguity between homonyms, linden: gentle in the accusative, and linden: lime, serves as the starting point for the poem, a true musical situation, as Adorno would point out, adding: “Ich atmet ‘einen linden Duft highlights a particularly exemplary trait which, even from a technical point of view, places the whole of Mahler’s vocal production well ahead of its time: the synthesis of motifs and themes in the voice and accompaniment. Here, both come together without the slightest impurity, in extreme tenderness; this is where the greatest intensity takes sanctuary. Having reached the absolute limit of silence, this Lied, with its strictly tonal relationships, is reminiscent of Webern’s gesture. The harmonic ribbon is stretched over harmonic abysses; as he retraces his steps, these chasms end up being integrated into the form and, at the same time, are reconciled within it.

By his own admission, Mahler describes “the feeling one experiences in the presence of a loved one with whom one is completely comfortable, without a single word between two souls being necessary”, to which Adorno would add much later: “The poem was, I hardly dare say, composed, or rather redesigned by Mahler, like musical graphics that can literally break your heart.” Of particular note at the end is the sixth added to the major perfect chord which precedes the conclusion of the Lied von der Erde.

It is the most extensive of the five Rückert Lieder, and also the most deeply felt and autobiographical, an unrivalled summit in all of Mahler’s productions. The melodic kinship between Ich bin der Welt abhanden gekommen and the famous Adagietto of the Fifth Symphony has often been noted. The expressive content is also very close; contemplation, ethereal meditation, even if Willem Mengelberg claimed to have learned from Mahler’s himself that this Adagietto was actually another secret message of love for Alma during 1902, the same summer as Liebst du um Schönheit. “It’s me,” Mahler said of this Lied. Never, in fact, has a musician described “the atmosphere of total accomplishment” in a more overwhelming way, “the feeling which fills us, and which rises to our lips, yet without crossing them”. Never has such intensity of expression been achieved in absolute stillness, in such a suspension of time, in this almost oriental mysticism, in this harmonic and tonal, and even rhythmic, stillness, which transforms this song into a fascinating mirror with reflections of the sky.

This is another nocturnal song, located in Mahler’s work halfway between the “Midnight Song” of the Third Symphony and the Nachtstücke of the Seventh. In the darkness of the “deep” hour, man confronts his fate. The tragic loneliness of the poet is deeply symbolised by long descending scales which plunge into the abyss and are often deprived of the slightest harmonic support. However, the two major episodes offer a glimmer of hope. By pure thought, man escapes from his night prison before entrusting his destiny to the divine power celebrated by the coda. Mahler drew a parallel between this triumphant affirmation of faith and the closing of the Second Symphony (and which would also characterise the end of the Eighth Symphony). The fact that this proclamation is not as convincing in its optimism as the clear pessimistic tone (or melancholy optimism) of the Lieder eines fahrenden Gesellen closing, the Kindertotenlieder or the Lied von der Erde, (in that it is more deliberate than felt), it is because Mahler was going through a transitional period in his life, a time characterised by break-ups and heartache rather than any level of certainty. In Um Mitternacht, what captivates us most of all is the feeling of loneliness, doubt, and even anguish, tormenting a man in the depth of the night, a feeling made all the more real by the obsession of the descending minor third and, following that, the ascending accompaniment, always with a dotted rhythm, (we observe a symbol of time represented by the ticking of a pendulum), then, as if in response, a refrain, made from the haunting “Um Mitternacht” motif, characterised by an ascending minor second and then a descending scale in the voice.

As always, behind the apparently simple strophic form of this song, there are many subtleties in detail, in particular the numerous metre changes which soften the vocal line and free it from any symmetry constraint.

The ascending melodic movements, so typical of Mahler, (e.g. in the Resurrection theme of the Second Symphony and the Accende Lumen of the Eighth), come back again and again and really leave an indelible mark. In the second stanza, we find an eloquent example of Mahler’s rubato obbligato on the word “Frühling”, with the prolonged duration having to pass from binary to ternary form. But the emotion comes to a head in the final melisma “immer, immerdar”, which delays the end of the sentence, and in some way suspends it in a feeling of immobile ecstasy, freed from all heaviness, “as if the feeling could no longer express itself, as if he were strangling himself in his own outburst… What is expressed is so overwhelming as to render the phenomenon, the very language of music, indifferent. It does not finish its utterance; expression becomes a sobbing”, writes Adorno. 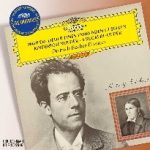 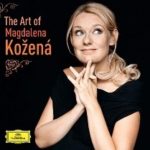 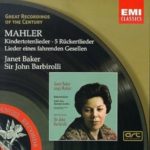