Alexandre Bloch and the ONL, a new discographic reference for the 7th 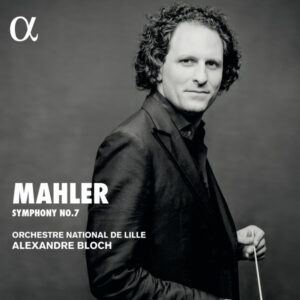 What a wonderful surprise! After a performance of Mahler’s complete works in Lille, between January 2019 and January 2020, as well as an exceptional concert at the Paris Philharmonic (the 7th Symphony on 19th October 2019), Alpha classics is now offering us a recording of the Seventh Symphony. Mid-term at the head at the Lille National Orchestra, Alexandre Bloch put himself at the forefront by planning these complete works and recording one of the most complex symphonies. Needless to say, it is an immediate success and this version immediately ranks amongst the most convincing in the discography, revealing a passionate and authentically Mahlerian conductor, a conductor who knows how to articulate and emit his vision and enthusiasm to a transformed orchestra.

What is most striking about this interpretation is the accuracy of the tone and the natural balance that exists between a scrupulous respect for the score and the sense of narrative. In a nutshell, one could go as far as to say that it sounds perfectly “Mahlerian”. What a fantastic job with the orchestra to achieve such a great result! From the introduction of the first movement, the tone is set: the serious and solemn tenor horn of Lilian Meurin dominates and casts a marmoreal glow over the dark orchestra, until the terrifying conclusion of the episode (bar 27, with a first modulation). Throughout the different moods of this complex movement, it is impossible to escape from the dark, disturbing, and somewhat hypnotic atmosphere. With a perfectly balanced and attentive orchestra, controlled tension and the multiple meticulous details that stay true to the melodic line, this first movement advances in a relentless and authoritative manner.

It is therefore with a certain sense of “shock” that we approach the first Nachtmusik, which is just as brilliantly performed. From the beginning, there is a superb fusion of timbres between the small wind instruments and the horn, with a somewhat far-removed rhythm and one quickly feels a military character contrasted by alternately lighter episodes (“Semper l’istese Tempo / 79) and more disturbing ones (” Poco meno mosso ”/ 89) or flamboyant (96). The journey continues with an ambitious Scherzo, truly “Schattenhaft”, which is teeming with multiple orchestral interventions while never losing its general line. The demonic whirling of the first bars does not subside until the Trio (134) and then resumes from 144 “Wieder wie am Anfang”. We remain overcome by the technical mastery of the orchestra (the subtle and precise small wind instruments, the supreme brass instruments which are never too overbearing, the sumptuous strings, and the beautiful soloist interventions) which is made all the more discernible by an extremely beautiful sound recording. If we had to choose, this would probably be one of the most successful movements.

The second Nachtmusik brings a welcome and cheerful contrast, although the ambiguity of the music is also captured. As the conductor explains in his short introductory video (“La minute du chef” https://www.youtube.com/watch?v=SmOiy596VnY) it is a movement noted as being “Andante amoroso” and we can certainly say that this “amoroso” spirit is conveyed here. The Rondo-Final, on the other hand, is played with ardour and with no limits to its sometimes noisy and chaotic facade, a brutal awakening from a night rich in mystery and passion. The light multiplies, the episodes always follow one another with the same communicative energy (for example, with the return of the “Tempo I subito” / 268). Brass and percussion instruments come to the party, and one can only be overwhelmed by the jubilant character of the ensemble.

Under the particularly inspiring direction of its conductor, Alexandre Bloch, the Lille Orchestra puts its name to one of the most well-renowned versions of this symphony, which nevertheless already has many beautiful recordings! A version which deserves to be heard sooner rather than later, one which deserves to be known in its own right, as it makes this major but sometimes unrecognised piece of work both readable and accessible As a bonus, we have the pleasure of witnessing the emergence of a very talented Mahler conductor, one which we will follow closely, and one which we hope will be behind many concerts and recordings to come!